British artist Patrick Murphy, the person behind the much-celebrated British Road Sign Project, has today launched a very special set of screenprints, produced in collaboration with Margaret Calvert, featuring designs chosen by the woman herself.

The five prints celebrate one of the most ambitious and effective signing systems ever to be launched in Britain. The new system in 1965 related to Continental protocol and included a set of pictograms and a new letterform named Transport designed by Jock Kinneir and Margaret Calvert. Despite minor modifications, the system still remains in place today.

Many of Margaret’s pictograms used on the signs were inspired by aspects of her own life. Eager to make the school children crossing sign more accessible, she replaced an earlier version that used a boy in a school cap leading a little girl, with one of a girl – modelled on a photograph of herself as a child – leading a younger boy. Another example is how the cow featured on the ‘Cattle’ sign was based on Patience, a cow that lived on her relatives’ Warwickshire farm.

The five limited-edition prints are only being sold through the Design Museum and Patrick’s British Road Sign Project store.

“The prints are to scale, so the designs are the same size as actual road signs we see in the street,” says Patrick. “I can think of no other piece of design that has the power and instant recognition than these beautiful pictograms produced by Margaret have. Although they were launched in 1965, they still seem contemporary and fresh.”

The collaborative works evolved the original signs’ function of instructing people about speed limits and directions into a poetic disruption of our everyday. Patrick also invited Margaret to create her own anniversary sign for the project which was titled ‘Bang, Bang’ and was a standard sign that Margaret had a friend shoot 50 gunshots into.

An installation of those signs took place at the Design Museum during London Design Festival 2015 as well as along the Thames. If you’re interested, there’s a book about the project available and further anniversary signs at www.britishroadsignproject.co.uk.

During the project, Patrick asked Margaret to select five of her original sign designs to celebrate the 50th anniversary. The five subsequent designs were turned into prints which are now available as a set of signed prints for the first time.

The first in the set to be produced was the Children Crossing print which was launched at Somerset House in 2016 at the Pick Me Up graphic festival. It was one of the first art prints to be produced in collaboration with Margaret Calvert. 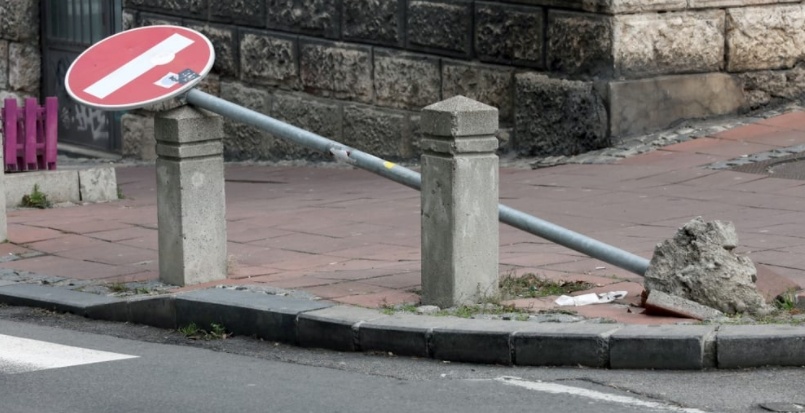